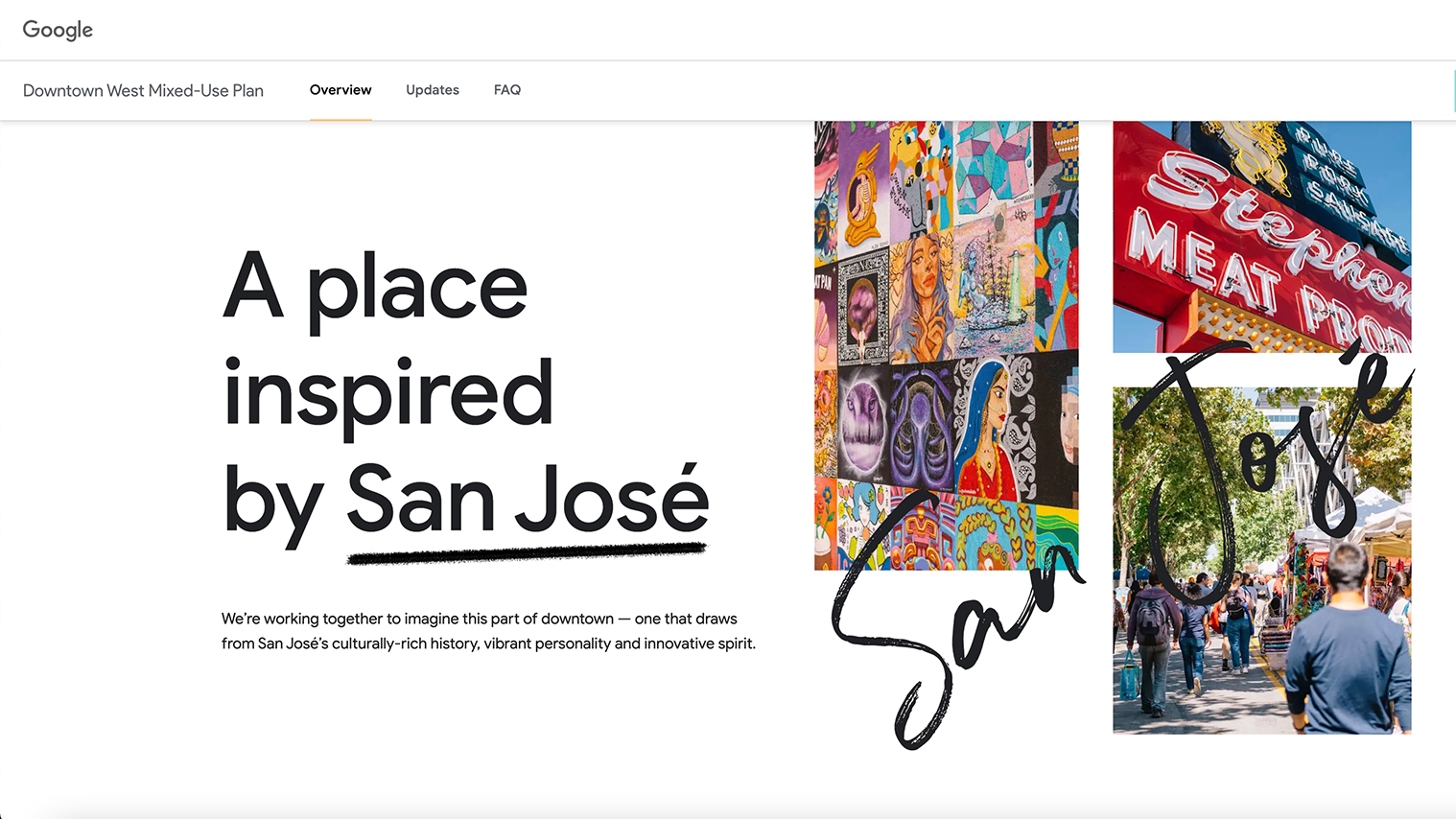 If there’s one web design trend I think we all should be paying attention to in the social entrepreneur space, I think it’s one-page websites.

They help people focus, usually on one issue or action.

And, unlike a regular website, which might have a full navigation menu and multiple inside pages, a one-page website will usually get straight to the point and present all the information someone needs to know on a single page.

If done well, it will keep people scrolling.

People will also want to go deeper into the information until they’re compelled to join your community.

In today’s article, I want to spend some time talking about the value of one-page websites and how social enterprises can use them for social justice. One of the best examples I’ve seen recently is the website for Google’s Downtown West Mixed-Use Plan in San Jose.

I first learned about this website after hearing that San Jose finally approved the tech giant’s plan to build a new 80-acre campus in the middle of the city.

This issue has been full of controversy for years.

Activists and residents have been showing up at meetings to protest the development and express their concerns about Google displacing a lot of working people, who have contributed to the city’s culture and who have called the city home for decades.

After all, San Jose — which is the third largest city in California and in the heart of Silicon Valley — is not the cheapest place to live. Last year, the median home price was $1.1 million. If you’re a renter, you’re paying high prices too.

To Google’s credit, they didn’t just steamroll their plans through the community (although it seemed that way at first).

They hired people to hold meetings with the community and get genuine feedback. In turn, Google incorporated the community’s concerns into their final plans, which were approved by the City Council and the residents of San Jose.

If you haven’t already figured out where I’m going with this, we’re not just talking about real estate or good web design (which Google know frontwards and backwards).

This whole issue is about social justice.

So when you’re looking at the website Google designed to promote their new downtown campus, you’re not just learning about its latest real estate project. You’re seeing an example of how Silicon Valley is slowly learning that coding can’t solve everything when it comes to people’s everyday lives.

The first message you see in the hero section is great.

It focuses not on what makes Google so great but what makes San Jose such a great place to live.

There are a lot of great social enterprises and social justice-focused nonprofits out there. But one thing I often see missing from their websites is a clear message up top about what makes their mission so great for the community.

Just below the fold, they give you a quick overview of the project, the reason why the project is important and what people in the community think about the issues that are important to them.

I kinda look at this part like the first three to five paragraphs of the inverted pyramid model that you see in a lot of news articles.

The inverted pyramid is a method of news writing in which the broadest, most important points are delivered at the top of the story. This storytelling method is designed to grab the reader’s attention as quickly as possible. The rest of the story is filled with supporting information as the article unfolds.

If I was designing a website for a social enterprise, I would put the theory of change and some testimonials in this section.

Only after it has been established that Google’s development project has been years in the making and full of the community’s input do you get more details about how the project actually works.

This section is kinda like the section on a social enterprise’s website where they talk about the issues they’re trying to solve or the programs they run.

The trick is that you first have to get people to care before they can start caring about the issues, if that makes sense.

If you have numbers to support the impact you’re making, this is the place to show it. Check out how the website helps the community imagine what they’re going to create with supporting facts and figures.

I also like how they’ve taken the time to create visuals that help people imagine how they’re going to the make the community better without ignoring the history and culture that built San Jose into what it is today.

A nice slider works well in this section.

Most importantly, they include a Call-to-Action at the bottom.

There is always some debate on where to place a CTA (or whether to make it a pop-up), but I think this one was done nicely. The reason I like it is because it’s not just a basic contact form.

It invites people to continue the conversation by giving them a prompt to answer.

If this was a one-page website for your social enterprise or nonprofit, just imagine how powerful it would be. And you wouldn’t have to worry about creating multiple inside pages that people might or might not click on.

In conclusion, if you’re looking to make an impact and design a good one-page website for your social enterprise, steal some ideas from the website for Google’s Downtown West Mixed-Use Plan in San Jose.

The reason why the website for their new development works so well is because they incorporate the following elements into the story and design: