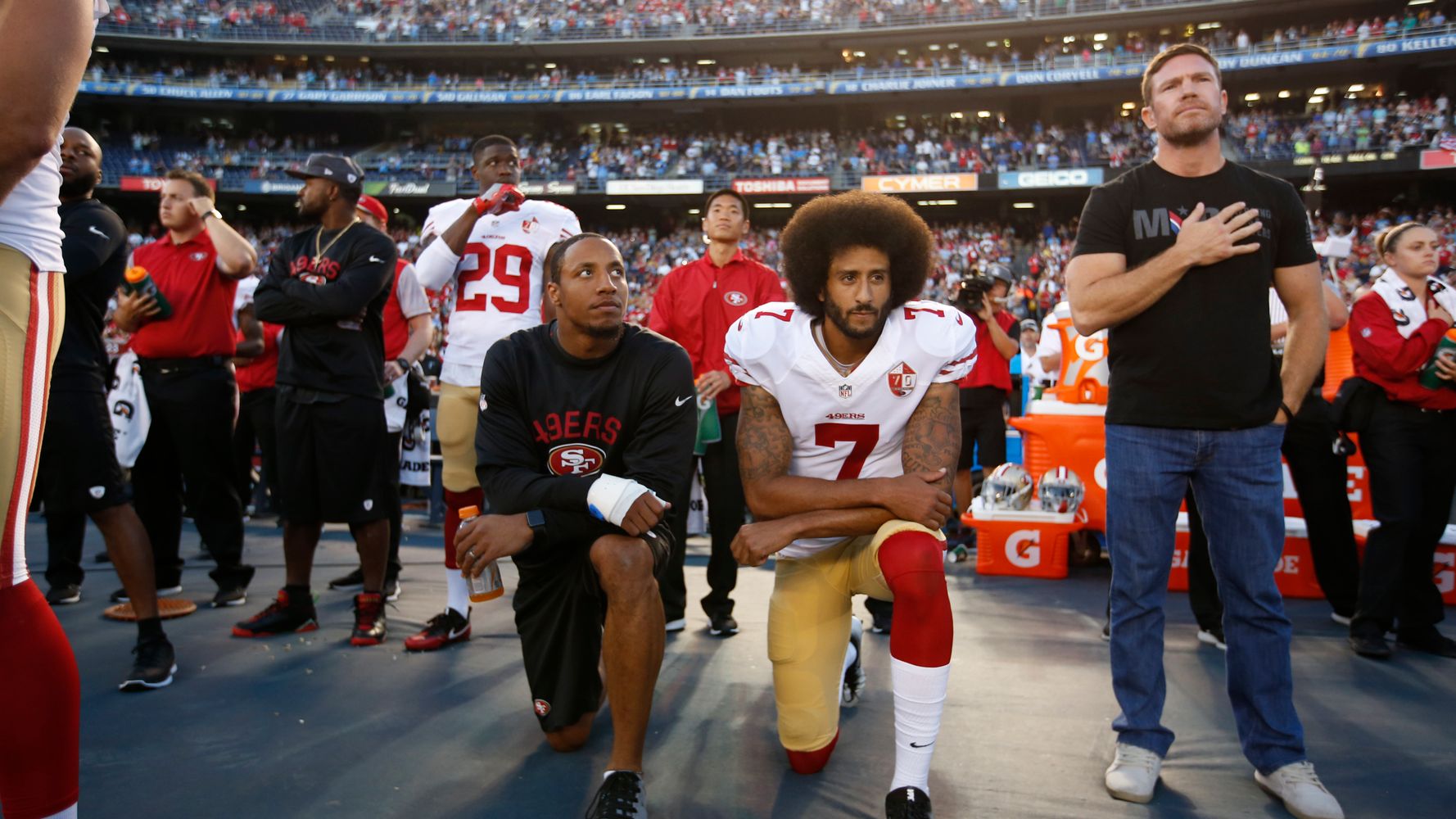 By now, everyone should have heard the name Colin Kaepernick, a controversial sports figure and a household name thanks to his national anthem protest that sparked a movement when he was a San Francisco 49ers quarterback.

On one side of the fence, millions of people supported his silent protest during his NFL-playing days and they continue to support his ongoing fight to raise awareness about the racial inequality, police brutality and social injustice facing black people in America.

On the other side of the fence, people question his patriotism and they feel like the way he has carried out his cause is disrespectful to those in the military, the sacredness of the American flag and all the fans who enjoy one of America’s most cherished games.

Things have gotten pretty interesting since Kaepernick’s first national anthem protest, and it looks like there is more to come. But one thing has become clear to me as a storyteller: this has gone way beyond the football field and it’s gotten people all in their feelings.

Ladies and gentlemen: I present to you a real-time case study of how to do content marketing as a social entrepreneur.

A movement and a compelling story

Let’s start by taking a look at the movement Kaepernick started and how it’s related to storytelling.

Ever since he decided to take a knee, Kaepernick has gained more popularity by continuing to be outspoken on social justice issues.

He scored the ultimate win by landing an endorsement deal with Nike, which came with a new multi-year contract with Kaepernick-branded shoes and apparel, getting Nike to contribute to Kaepernick’s Know Your Rights initiative and a giant “Just Do It” billboard in San Francisco’s Union Square.

He did all of this without throwing a single pass in several years.

While some people might find Kaepernick’s activism to be polarizing (and, depending on what side of the fence you’re on, unpatriotic), the reality is his marketing strategies worked.

We know they work, otherwise he wouldn’t have been able to get numerous awards from the ACLU, Sports Illustrated or Amnesty International.

He certainly wouldn’t have been able to win a legal settlement with the NFL, get the attention of the president of the United States and still make a lot of money without a smart content marketing strategy.

Controversy and a bigger connection

The success partly comes from how controversial his campaign turned out to be.

While Kaepernick was essentially banned from playing football, he continued to make noise off the field in a very creative, yet polarizing, way. He launched a donation campaign where he gave out $1 million to charities serving disadvantaged communities.

Kaepernick was well aware that, in the past, American professional athletes who have protested the flag over racial injustice did so knowing that they were potentially cutting off their future earnings potential.

But he stuck with his morals and, in turn, kept making money and inspired millions of others by challenging the country to live up to the ideals that the flag is supposed to represent.

Turns out, being controversial and taking a stand for an issue that deeply affects people — especially black people — is great for business.

Earning the right to sell to your audience

But what you can also learn from Kaepernick is a pretty immaculate example of content marketing.

Content marketing does not just mean blog posts. It also means video, photos and really anything that can be considered content.

The first videos and photos of Kaepernick kneeling during the national anthem were examples of content.

If we look at what he did as a strategic marketing plan, those kneeling videos and photos were part of the strategy where he considered the viewer a cold lead. People didn’t ask to be watching Kaepernick kneel and they had no reason to want to stay tuned.

So the next thing Kaepernick did was establish authority. During a post-game interview, a reporter asked him why he decided to kneel and, instead of avoiding the question, Kaepernick said that he wanted to use his platform to fight against police brutality and racial injustice.

At that point, the audience knew what he stood for and that he knew his stuff. He even shared some of his personal thoughts about how his activism had grown since being in the NFL, and this allowed him to establish trust.

The next big thing he did was announce a pledge to donate $1 million to charities that were dedicated to fighting against racial injustice.

Nearly every donation that he announced was covered in the news and posted on social media.

This was important because the free publicity, videos and social media posts were not only full of great value (and the content was free to watch by his fans and supporters) but they also provided an opportunity for Kaepernick to build more trust and authority.

Now Kaepernick could have taken advantage of all that hype and told people to buy one of his Nike jerseys right after they watched him give out one of his donations, but he knew it was still too soon. If you were following his movement up to that point, you’d probably ignore his sales pitch and carry on with your life.

That’s because, without one extra part of the marketing strategy, he still hadn’t done enough to prove himself to encourage people to buy from him.

That extra part was Kaepernick’s Know Your Rights Camp, which not only provided valuable training to communities throughout the country but also served as Kaepernick’s content machine.

With that extra content marketing component, Kapernick was finally able to show everyone the value he brings to the table (that’s what Nike realized).

In content marketing terms, he had now earned the right to sell his stuff to people and the audience was more interested in buying from him.

That’s exactly what happened when he launched the “Just Do It” campaign with Nike.

A funnel will almost always start with something free — a teaser — and then encourage more and more engagement right up until the point where it tries to make a sale or ask for a donation.

It all starts with an amazing story

If you want to build trust and generate sales or donations from your own website, then you need to mimic this process. And it starts with amazing content.

What’s the point I’m trying to make? Gone are the good ol’ days of doing things (whether in business or nonprofit work) where all you had to say was “trust me, I’m a professional.”

We’re now in the era where people want to be persuaded to take action. People don’t just want to buy stuff or latch onto another idea. They want to be inspired.

So when you’re trying to figure out how best to persuade your supporters to take action, do what Kaep would do, think of the most inspiring part of your social enterprise and use that message to draw people closer to your cause.

I’m reminded of an old African proverb that goes a little something like this:

Until the lion has his or her own storyteller, the hunter will always have the best part of the story.

The proverb describes the unknown realities in the forest when a lion and a hunter come face to face.

Everyone knows that a lion is considered king of the jungle and the most powerful animal in the animal kingdom. But a hunter is feared even more because, if he kills a lion, he will bring home a story that makes the hunter shine. That story will almost make him seem like a god.

This proverb provides an important lesson about content marketing and it helps explain how Kaepernick has remained so influential over all these years:

The one who controls the narrative is often the winner.

So if you’re fighting for a cause and you know you’re going up against the status quo, it’s time to pull out your best stories and inspire people to see things from your perspective. This is how heroes win the day.

How I Helped This Business Add More Than 4,000 New Email Subscribers to Its List—In the Middle of a Global Pandemic
I don’t care what anyone says…no business or organization can predict what would happen if, all of a sudden, the market collapsed or a disaster happened or some world event...
How I Helped a Nonprofit Raise Nearly $15,000 in 24 Hours

It’s getting close to the end of the year, and you know what that means…

© Community Symbol 2023 - All Rights Reserved
Back To Top