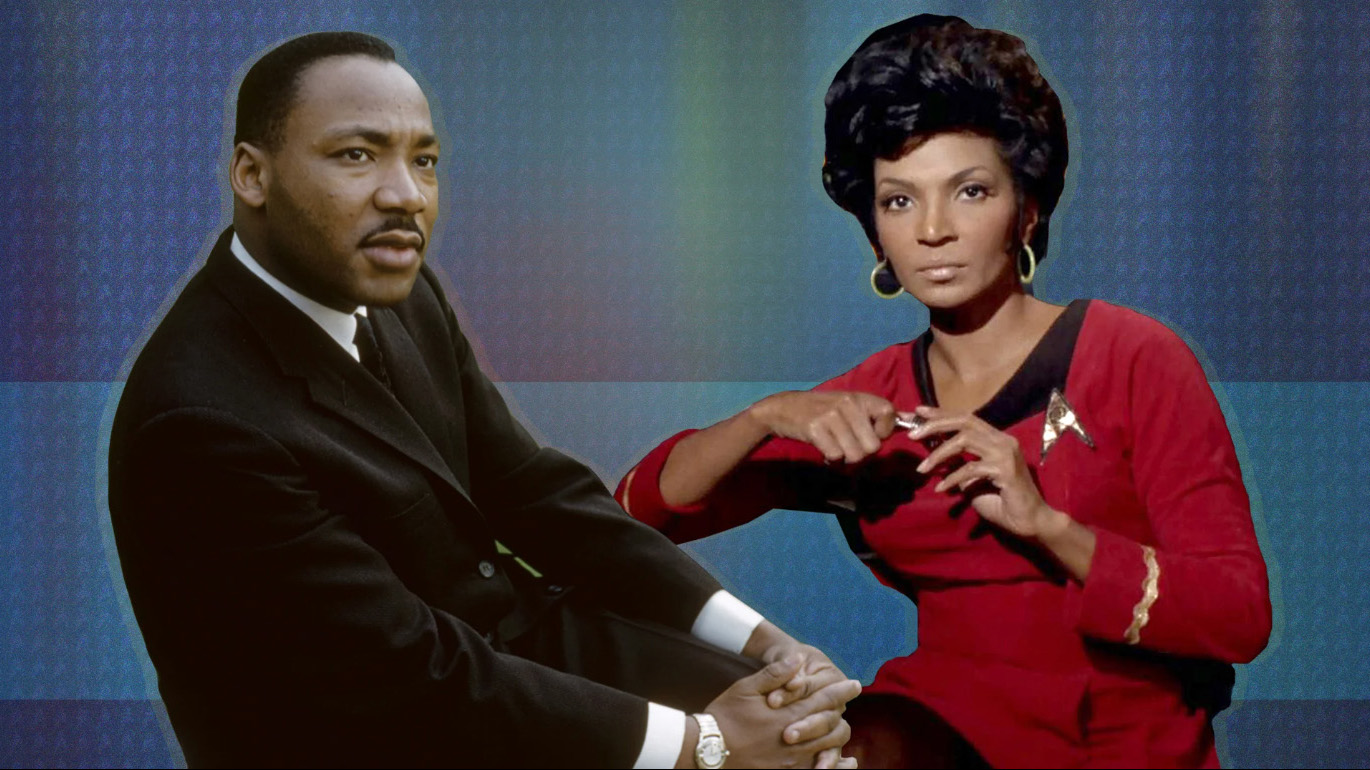 What do you picture when you hear that someone is a Trekkie — the word that refers to the ultimate fan of the TV and movie series Star Trek?

You might be thinking: “They probably work at NASA” or “They must be an engineer at an elite research university.” Or “They look like someone straight out of a scene from Revenge of the Nerds.”

But there are two things that recently happened that are making me rethink what a sci-fi geek looks like. Nichelle Nichols, the actress who played Lt. Uhura on Star Trek, recently passed away. And I just learned (I know I’m late to the party) that FX is going to make Octavia Butler’s Kindred into a new TV series. Which tells me that, if you’ve dedicated your life or your business to advancing racial equity and social justice, then it helps to be a little bit of a sci-fi geek.

The connection between Dr. King and Lt. Uhura

Did you know that, after the first season of Star Trek ended, Nichols planned to leave the show to go back to Broadway?

But before finally making up her mind, she recalled taking the weekend to think about the decision. On that very weekend, she went to an event where one of the staff members told her that her biggest fan was desperate to meet her. She kindly agreed.

That fan was none other than Dr. Martin Luther King Jr.

He said that Star Trek was the only show he let his children stay up late to watch. The reason? She was an example of the great strides African Americans had made toward equality in real life and on television.

Uhura was intelligent, beautiful and commanding, and she had an important job that wasn’t specific to a Black woman. She proved that a Black woman could indeed be all those things — a scientist, an engineer, a pilot and a leader.

Nichols, of course, decided to stay on the show…because Dr. King was a Trekkie. Mind blown!

Now, it’s safe to say that Dr. King and Nichelle Nichols were instrumental in helping America see a better future for itself.

With the help of shows like Star Trek, people were able to visualize a world where intolerance didn’t exist and where the differences between people, cultures, ideas and attitudes were a good thing — not something to fear.

We’ll come back to this point later.

The genius of Black Mirror

Now let’s talk about one of my favorite sci-fi shows, Black Mirror. Black Mirror is a sci-fi anthology series on Netflix that explores what could happen if we let technology take over our lives.

I’ve always liked the show because it’s kinda like The Twilight Zone, but it uses technology to comment on contemporary social issues — ranging from race, class and gender to everything in between.

Several years ago, I remember watching an episode called “Men Against Fire,” which was about a group of soldiers who were given a mission to protect some frightened villagers from an “infestation” of vicious, feral mutants. The episode’s main character was this soldier, who happened to be Black, and the military implanted a device in him and his fellow soldiers that helped them track down the mutants, whom everyone called “roaches.”

The mission was going well until an interference with the soldier’s implant revealed he had been brainwashed into hunting people that were, in many ways, just like him.

Black Mirror wasn’t just talking about the dangers of fighting senseless wars overseas but also the dangers of demonizing “the Other” in a way that has obvious parallels to the white nationalism that has been spreading throughout the U.S. and rest of the world.

The thing I really want people to take away from this example is that science fiction gives us the ability to reimagine our reality. This type of storytelling can become a powerful weapon when you’re dealing with serious issues such as human rights, environmental justice and systemic racism.

Why Octavia Butler is so important

I’ve only read Kindred so far, but I’m familiar with her work and have a few of her other novels on my reading list.

Why is Butler so important to this racial equity and social justice work?

She not only came up with a lot of cool stories that should’ve been award-winning Netflix movies and shows by now. She not only predicted a lot of the controversial social issues that we’re dealing with today’s world. Through her work, she also challenged the status quo thinking about people of color, gender norms, climate change and the pharmaceutical industry. She even predicted Trumpism.

Butler‘s ability to imagine a future that includes everyone goes back to her deep understanding of human nature.

While many of her themes are dark, raw and weary about the future, the main lesson to take away from Butler’s work is that people need hope. Above all else, she tried to show us that there is always hope. And since we built this world, we can always build another one.

So if you’re a social entrepreneur and you’re on a mission to solve the world’s most pressing challenges, don’t just tell a story that focuses on what’s wrong with the world.

Show people an alternative reality they can believe in — one that puts them in a plot of a science fiction story.

If you’ve done it right, and when they get to the end of the story, 99.99% of the time, they’ll choose your version of hope over fear.